February 03, 2013
This years Oakland A's Fan Fest turned out to be much different from last year. This is due to the fact that the A's had a very successful season in 2012 compared to 2011. This year it was sold out. My brother (the A's are his favorite team) and I arrived as the doors were opening. The A's fan fest is held in the Oracle Arena, which for those of you that don't know, is right next door the Oakland Coliseum. Of course, we made a B-line for the memorabilia sale. Last year, the memorabilia sale was held in the "Bud Club" lounge downstairs at the Oracle Arena. There was no line, we just walked in. Plenty of caps, but jerseys and pants had been picked clean. This year, it was along the main walkway. My brother and I quickly realized that we might not be lucky enough to just walk in. We were right; there was a huge line waiting to get in! After what seemed like an eternity, we were ushered in to the sale. Luckily, there was an abundance of items; still plenty of caps along with jerseys, pants, game used balls, helmets, jackets, bats, and wine bottles from their wild card celebration.

My brother and I began digging through the caps, hoping to find some from the 1955 Oakland Oaks Pacific Coast League turn back the clock game held last July. Those caps were not released to retail. Unfortunately, they were nowhere to be found. I found a Jemile Weeks team-issued cap from the 1936 Philly A's turn back the clock game vs. Boston. That was the only cap from that game that I found. Most were from opening day, camo logo caps from Memorial Day and the 4th of July, and also several Postseason caps, although they were all road versions.

The Jemile Weeks 1936 Philladelphia A's turn back the clock cap 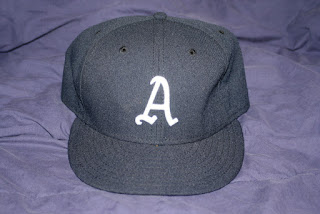 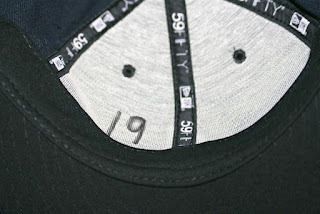 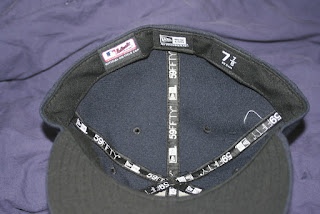 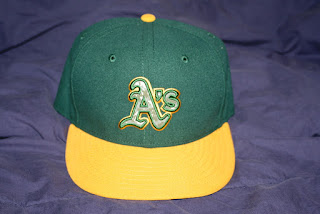 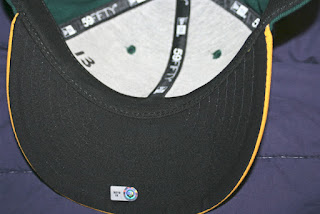 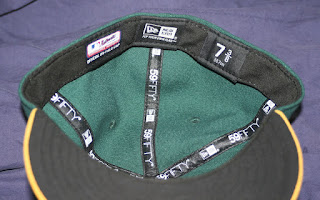 Outside of the Stephen Drew team issued Postseason road cap 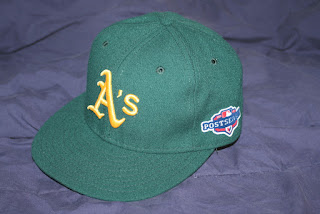 My brother ended up with Stephen Drew's game used Postseason road cap as well as one used by George Kottaras. His best find game with a bit of luck; underneath the pile of jackets, he found a game used Grant Balfour cap from the Memorial Day game.

Grand Balfour's Memorial Day camo logo cap. Balfour altered his cap in many ways, including cutting out some of the buckram and removing some of the sweatband material. 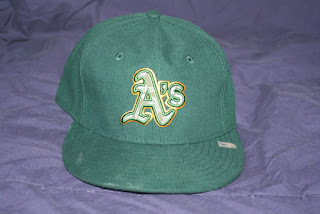 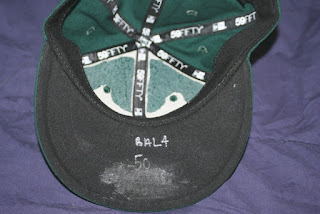 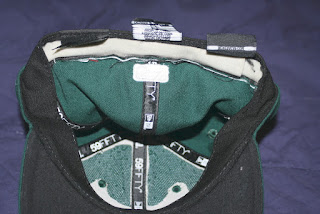 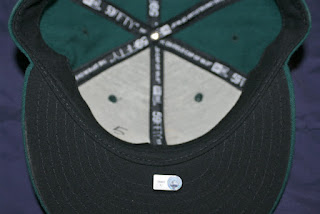 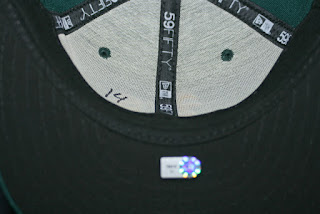 While we are on the subject of the A's, a couple of bizarre vintage A's caps have shown up on eBay being sold by the Lelands sports memorabilia auction house. First, we have a circa 1968 and 1969 cap, which at first glance appears to be made by KM Pro (the profile, embroidery, 7-stitch visor). Now, look at the underside (#30 in both of those years belonged to pitcher Jim Nash). There appears to by a New Era tag on the sweatband! What in the world? 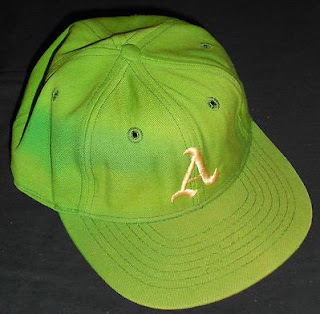 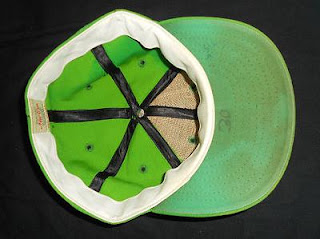 Second; we have a mid 70s A's cap made by New Era. Turn it around, and there is a strange tag that says "Pro McAuliffe". What? Wait a second - wasn't the McAuliffe name gone from caps by 1968? 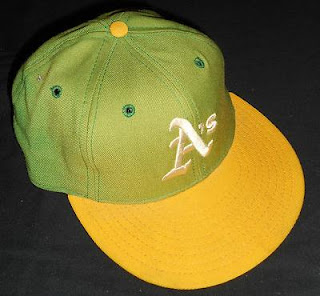 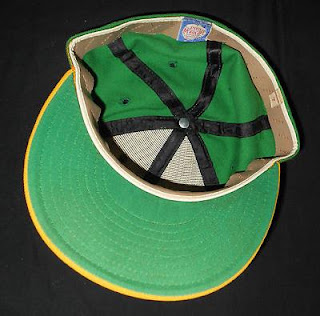 I have a couple of theories...

Under Charlie Finley's ownership, the A's were extremely thrifty. I have read that instead of ordering new caps and jersyes, they would just have the old ones repaired. Which means, McAuliffe & KM Pros may have been repaired by New Era and vice-versa. The sweatbands would definitley be the main thing replaced. Look at the 68/69 cap. The sweatband looks brand new! I have seen some caps before with the "Pro McAuliffe" label. They might have been made for New Era repairs on KM caps. Since it probably didn't happen often, there may have been leftovers from after the McAuliffe label was gone. My second theory is that the repairs were contracted by Stall & Dean, who made McAuliffe jerseys for years after the name was gone from caps. Stall & Dean would repair the jerseys, and may have had New Era repair the caps for them under private label under the McAuliffe name. Does any of that make sense? That's all I've got...