August 14, 2016
A couple of weeks ago, I got a message from a friend and fellow collector saying that he had found an odd Padres cap that he had never seen before. This is the cap. 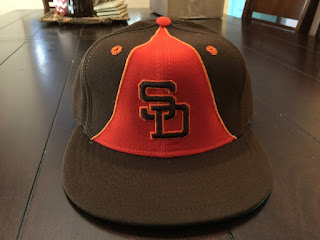 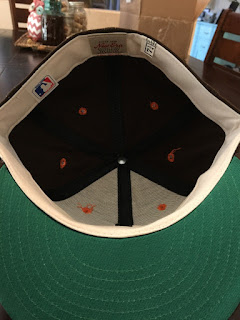 The caps with this style had come from a long-gone sporting goods store in Buffalo, NY (coincidentally, the home of New Era) and the elderly woman that co-owned the store sold off the deadstock that had been sitting around to someone else, who then sold some of it to my friend. Immediately we believed that this cap was made to go with the recently unveiled 1985 Padres prototype jersey, which is owned by the National Baseball Hall of Fame and was displayed at the 2016 MLB All-Star Game FanFest in San Diego. 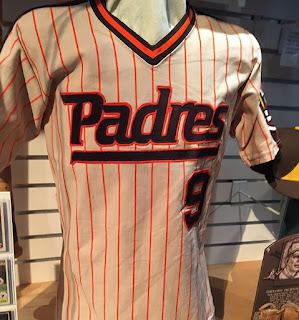 Looks like a match, right? Turns out to be not so. I reached out to some folks in the know via Twitter, and one person that had seen the original 1985 prototype designs said "Totally different-cap that went with the Fanfest jersey was brown with a yellow interlocking italic "SD".

So there you have it. A rep at New Era could not find anything in their records about it (big surprise). Another knowledgeable person that was contacted about this cap said "It was made for a reason." This leads me to a theory...

The Padres made a few minor changes to their uniforms in 1984. They changed from pullover to button-up jerseys, slimmed down their cap logo, and then changed from sans-a-belt to belts on their pants in the postseason. Could they have been planning a more drastic change? The colors of this cap do match the lettering of the 1984 home jersey. Perhaps it was an idea for a new home or road cap and they had some examples made? The interior tags on this cap date it to 1982-1984 (with the slim logo putting it at 1984). Also, remember that another odd Padres cap from this time also has surfaced; the cap with the yellow visor. 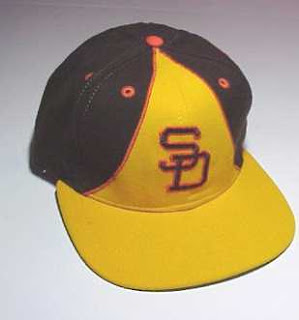 This cap also has the slim logo that started being used in 1984. It's pretty clear that the Padres were up to something. But hey, they could just be genuine F-ups that New Era offered to nearby sporting goods stores for a discount price. I guess we'll never know...