I'd like to discuss the events that took place over the past year with New Era closing their plant in Derby, NY.

In November of 2018 it was announced that New Era would be closing their manufacturing plant in Derby, NY, their last US manufacturing plant. The plan was to close the plant in March of this year, but some workers stayed to do some additional work until June. The last caps made in Derby were MLB player issue caps for special events (4th of July, etc). Many looked for answers. New Era's official statement was that they no longer wanted to manufacture their own product and wanted to be more of a "brand" than a manufacturer. The MLBPA spoke out and asked New Era to keep the plant open but it was to no avail. Some blamed politics as New Era's real reason for the closure. New York state's tax incentives for the plant were expiring. Others blamed Trump's tariffs, which hit the headwear industry hard and New Era spoke out about them not long before they announced the closure. 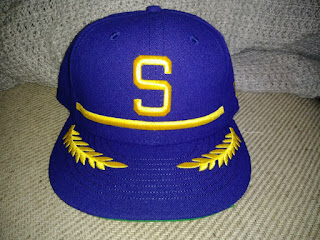 A team issued 1969 Seattle Pilots cap, worn by the Seattle Mariners in June for a "Turn Back The Cock" game. These were among the last caps made at the Derby plant. The retail versions were made overseas.

It was interesting to see lots of folks from around the country weigh in on social media. Of course I said my part. I had a stranger contact me and tell me that New Era's caps made in Derby were never available in retail and that saying they were was "liberal propaganda." Lots of pro-capitalism folks praised New Era for doing what they needed to do for the sake of the company. It was absolutely fascinating seeing all of the opinions being said. No one except us enthusiasts said anything about product quality.

Since MLB requires the on-field caps to be made in USA, the caps for MLB team issue are being assembled by contractors in the Miami, FL area at the warehouse of the clothing brand New Era owns, 5th & Ocean. There is very little manufacturing going on; the components are sent from overseas already cut and prepared and the Miami workers just sew it all together. None of these will be available in retail, again they are for team-issue only. The Player's Weekend caps were some of the first Miami-made caps to be worn on the field. The caps no longer resemble what was made in Derby; they are identical to the made overseas caps in shape and materials. New Era doesn't care that they now offer a shoddy, inferior product. Shame on you, New Era.

Only us hardcore enthusiasts can tell the difference. Only our trained eyes will notice the players on the field will look like they are wearing "Elmer Fudd" caps. Maybe some of the players will notice. 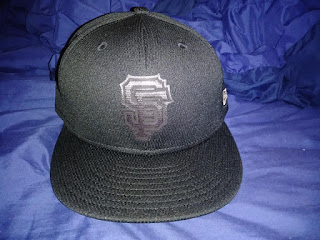 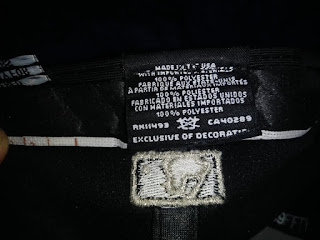 Despite the made in USA label, the cap was identical in construction to the caps made overseas. Note even the white size band is the same as an overseas cap. The made in USA size band was solid.