Showing posts from March, 2015
Show all

Look What The Katz Dragged In 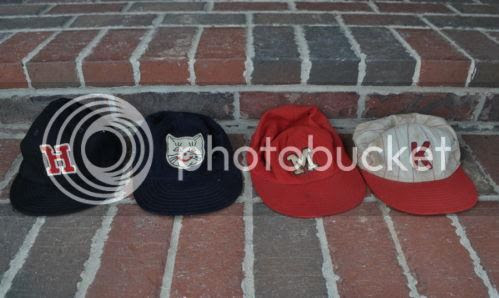 Last year, I purchased several game used vintage caps that I believed came from minor league teams in the 1960s. I was able to correctly identify some including a Knoxville Smokies and the other a Macon Peaches. Three of the caps (including the two mentioned above) were worn by Tom Tischinski, who played in the Athletics, Reds, and Twins farm systems and spent two years in the big leagues. The 3rd cap worn by Tischinski features a goofy-looking cat face. The cat is a felt shape with chain-stitched details. I could not find any team that Tischinski played for that would have had this as their cap After hours of internet searching, I was able to obtain Tischinski's current home address. I wrote him a letter asking about the cap. Not too long after, I received a reply from Tischinski. Aside from wanting to know how I got the caps (they were on eBay), Tischinski was able to tell me about the cat cap. He saod that the cap is from 1961 when he played for the Ban Johnson Amat
9 comments
Read more
More posts