Showing posts from August, 2011
Show all

August 23, 2011
Fellow readers, New Era would like everyone to know that they have ceased all cap repairs. I spoke to Dan Harrigan (the assistant customer service manager) and he told me that it takes too much time away from production, and they haven't set up a way to charge money for it. All caps that have been shipped in for repairs will be returned un-repaired. Who is to blame? Well, that would probably be yours truly. Some people that sent their caps in apparently referenced me and my blog, saying that they found out about it that way. Of course, I had no idea that so many people would be sending caps in for repairs, and I also had no idea that so many people were reading my blog! And to top it off, I'm not the only one that has blogged about it. I have sent several batches of caps in for repairs, completely unaware that it was a burden to New Era. After all, I had been told that repairing broken visors was "an easy fix". Had I known otherwise, I probably wouldn't hav
8 comments
Read more 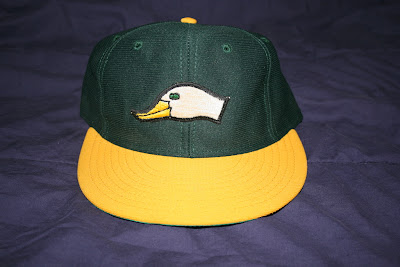 Hey everyone! Sorry for the lack of updates, but things have been crazy in my personal life this summer. Luckily, the craziness has died down and things are pretty much back to normal, so I should have some new articles coming soon. I have some things that I am working on. Right now, I just need your help to solve a mystery! I recently found this cap at a local thrift store. It's a vintage 100% nylon New Era cap that appears to be from the 70s. It features a logo of a duck's head, with a green crown and yellow visor. My first thought was that this was a Oregon Ducks cap, but I can't find any evidence of them ever using this logo. I figure it has to be a college or minor league team, since the cap is a fitted pro model. Thanks, Paul
8 comments
Read more
More posts