November 19, 2010
First off, congrats to the San Francisco Giants on winning the World Series! In my opinion, both the Giants and Rangers deserved to win. However, since I live in the San Francisco Bay Area, it feels great to have a local team win. Unfortunately I didn't get to watch it, I was driving to Los Angeles and had to listen to it on the radio.

I learned an interesting cap-related fact while watching the Series. Apparently Giants manager Bruce Bochy has such a large head that his cap is a custom-made size 8 1/8!

Now that the season is over, it's time to wonder what new caps will debut next season and which ones will be phased out. Apparently the Cleveland Indians have ALREADY introduced a new alternate cap and got rid of the one with the cursive "I". I am always too slow to go out and buy recently-phased-out caps before they disappear from stores. The last one I bought was the Chicago Cubs road cap that was phased out after the 2008 season. That cap is one of my personal favorites, and was the first pro-model cap I ever owned. I don't remember when and where I got it, but I wore it practically every day of my life between the ages of nine and ten. I wore it so much that the "C" logo turned white. I don't know what ever happened to it, I'm sure my mother probably threw it away. Below is a picture of yours truly, I'm guessing circa 1995 or 1996, at my grandmother's house on Easter Sunday. My aunt's old wiener dog is behind me. 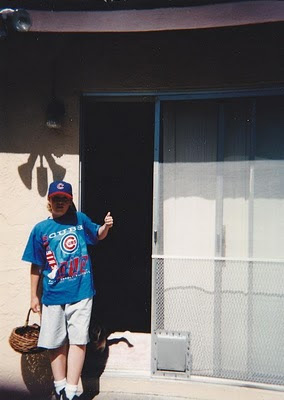 Feel free to share your story of your first cap in the comments section!