On May 18th, the Padres donned the 70s taco bell caps in a 1978 Turn Back The Clock game vs. Los Angeles Angels of Anaheim (the Angels did not participate). 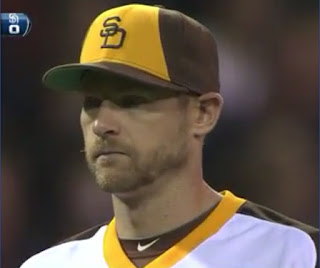 The caps had the shape that has been used for the past several turn back the clock games, with a flat logo, green underside, brown batterman logo with yellow interior, and again with the brown squatchee instead of yellow. Luckily, there was no new Era flag on the side. Like the 1983/84 caps of 2011, the caps were not available in retail. However, where in 2011 there were no taco bell caps of any variation available, there were some variants available this year. There were now 70s and 80s versions available, made with 100% polyester fabric and manufactured in China. I discussed them in a previous blog. While they did have cut front panels, they were nowhere near the proper shape. They were (and still are) available at the Padres team store and HatClub.com. A 1978 Padres cap with an All-Star Game patch on the side was also available in retail (which was also discussed in a previous blog). 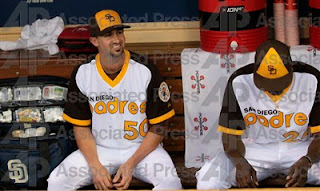 Some of these incorrect shape 70s versions actually showed up at the Padres 1978 turn back the clock game (compare the above caps on the left and right).

I will attempt to obtain some of the 70s caps from this game at the upcoming Padres fan fest.

In late June, the Tampa Bay Rays became the third team ever to wear a taco bell cap, the second being the Phillies on 1981 St. Patrick's Day of 1981. The Rays wore fictional 1979 uniforms, which were essentially a complete rip-off of the Padres uniforms of that time. Why the taco bell shape? Who knows. However, these taco bell caps were ALSO not available in retail. The retail version had a full powder blue front panel. Luckily, the team sold their team issued caps at the end of the season and I was able to get a hold of one. 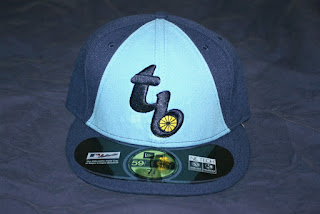 This month, the 70s and 80s caps were remade again. They are apparently exclusive to Hat Club, who went through a lot to get them made. The shaping of the front panels have improved, but not much else has changed. Eyelets were omitted for reasons unknown (and it was not the fault of Hat Club). 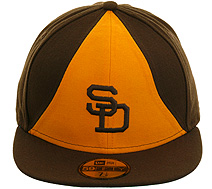 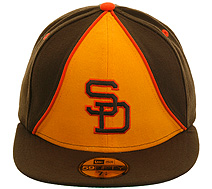 Will there be any Taco Bells in 2013? We will find out in the coming months!