March 05, 2016
It has been well documented that many teams wore "pillbox caps" at some point during the 1976 season and the Pittsburgh Pirates ended up wearing them for ten seasons after that point.

Aside from the teams we know that wore them for sure (Pirates, Mets, Cardinals, & Phillies, then possibly Expos and Yankees) there were other teams that no one knows for sure if the team wore them or not: White Sox, Red Sox, Cubs, Padres, & Giants. Sometimes it's hard to tell if the cap is game worn or team issued when they show up online somewhere. Sports Specialties made pillbox snapback fan caps available for all teams during the 80s, so you could imagine what it would have been like if your favorite team opted to wear them. New Era even made fitted cap versions of all teams as well (from what I can tell). Now, the Giants pillbox that I had seen in an eBay auction a few years back used the 1977 to 1982 logo. However, I had heard that the Giants had supposedly worn them in 1976, but the logo doesn't match the logo they used that year. Upon further research, I came across this photo of Jack Clark. 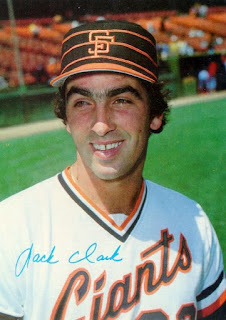 This was a publicity photo, and the year on the back of this print says 1980. I still can't find any evidence that the Giants actually wore these in a game, BUT Jack is in full uniform and that is definitely Candlestick Park and it looks like folks are starting to arrive to a game. This is the ONLY picture I can find of a Giants pillbox right now. Any thoughts?