October 14, 2010
As a Bay Area resident I feel the time is right to pay tribute to the San Francisco Giants and their 2010 playoff run by looking at and comparing their caps over the years. (By the way, neither of the Bay Area teams (Giants and A's) are my favorite teams).

Giants caps have really not changed all that much since moving to San Francisco from New York in 1958. The 1958 pre-season saw two different prototypes; one that Willie Mays wore in a press conference, and then the design that was airbrushed onto player's caps on Topps baseball cards (see the "Holy Grails" blog). It's always been the same colors: black and orange. There has been slight variances, most notably the orange visors of the late 70s/early 80s and has an alternate this past regular season.

The Giants primary cap maker dating back to the New York days until 1976 was Tim McAuliffe, Inc. (KM Pro after 1969) and remained that way until KM went out of business in 1976. I have seen New Era San Francisco Giants caps from this time period as well. Notice in the early to mid 60s the Giants had slightly larger interlocked "SF" logos, so this is most likely when they used New Era caps. McAuliffe/KM always used the exact same embroidered "SF" logo in the 50s, 60s, and 70s. At some point, most likely in the early 70s, the Giants switched to gray under-visor fabric and were most likely among one of the first teams to do so.

In 1977 The Giants made a drastic change to their uniforms to fit in with all the other flashy 70s uniforms,and the use of more orange was in order. With KM now out of business, New Era was brought in to make new caps with a revised interlocked "SF" logo and an orange visor. The new caps were not 100% wool; the button and visor fabric was nylon. Many teams at that time were experimenting with nylon fabric on caps. 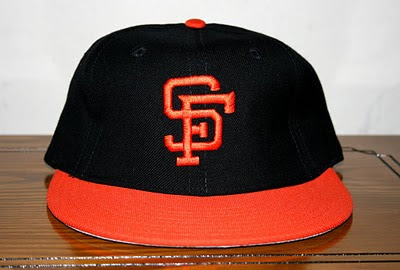 In 1983, the Giants returned to more "traditional" style uniforms and the logo was again revised and the cap returned to all black. The Giants would alternate throughout the 80s between New Era and Sports Specialties as cap makers. The Giants would wear these caps during the 1989 World Series when the big quake struck (which yours truly slept through). The easiest way to tell the New Era and Sports Specialties versions apart is by the embroidery; the Sports Specialties version is wider, flatter, and almost gives the illusion of an orange outline around the outside of the logo. 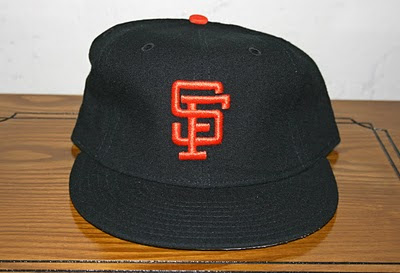 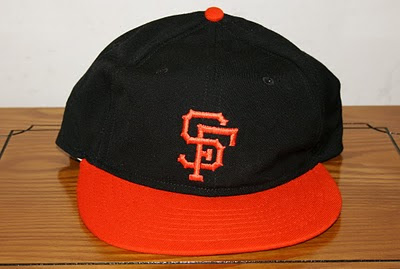 Unfortunately, mine is bent out shape due to being shipped in an envelope...

In 1994 the Giants returned to their 60s/early 70s style logo, and by this time New Era was the MLB's lone cap maker. Initial 1994 versions featured non-embossed logos, and so they are the most scarce version of this cap. Embossed logos made their debut that year and the Giants have stuck with that design since. 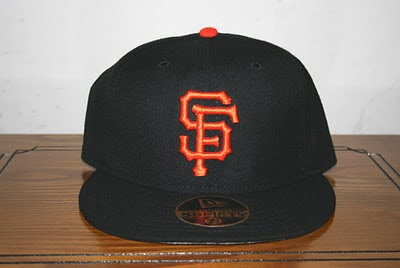 The year 2001 saw the Giants introduce an alternate cap. The cap was all black and featured a black version of the regular interlocked SF logo outlined in orange. The cap was one of two (or more?) experimental caps that featured black sweatbands and black under-visor fabric which as well all now know are on every on-field cap. After the devastating loss to the Angels in the 2002 World Series, the caps were done away with.

Finally, in 2010, new alternate caps were introduced. They are the same as the current style but features an orange visor very reminiscent of the late 70s/early 80s caps.