August 07, 2010
*Update 6/6/20* I'm having issues with images disappearing. I will try to replace missing pictures in the near future.

The history of the New Era Cap Company has been well documented. New Era has been the dominant cap supplier for Major League Baseball and anything baseball-related for decades but their dominance grew slowly, starting in the 1930s. Eventually they steam-rolled the competition, providing the majority of MLB on-field caps by the 1970s. They have been the exclusive cap supplier for Major League Baseball since the 1994 season.

New Era's interior tags evolved very slowly from the 1930s through the mid 80s. Since then they have changed rapidly, usually about every two years. Since 1982 there have been three tags inside of the cap; the MLB license tag (left side), New Era manufacturer tag (middle) and size tag (right).

Let's take a look at the evolution of New Era’s tags from as early as possible to the present day. Keep in mind that this guide is not 100% perfect. Game used and team issued caps were all used as references for this guide. Tags can show up years after being phased out, which often leads to confusion about when the cap was made. For example; if a cap with tags from 1999 appears in 2001, it's normal. Evidence has also shown that New Era sometimes keeps some stock in storage for a few years at a time, sending it out to teams and retail stores as needed. It also depends on what teams have in stock in the equipment room and how frequently certain sizes are issued to players. This guide will be updated as new research comes in.

This guide does not include caps made for spring training, batting practice, or certain special events that lack standard MLB & New Era tags.

1930s: The 1934 Cleveland Indians supposedly become the first MLB team to wear New Era caps on the field. There are no available photos of the interiors of New Era caps at this time.

1940s: New Era is largely a "private label" manufacturer for other brands. The Chicago Cubs wear New Era caps during the 1942 and 1943 seasons (pictured). The size tag in the photo had deteriorated, but it's likely the same as the one seen in the 3rd set of pictures below.

1950s: Still mostly a private label manufacturer. It is very difficult to find any photos of New Era MLB on-field caps from this decade, but this was likely the main New Era tag used at that time. 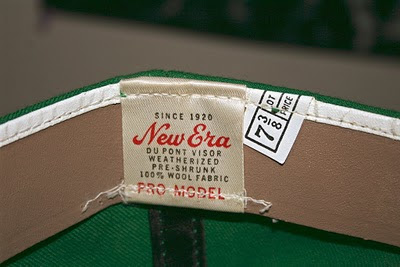 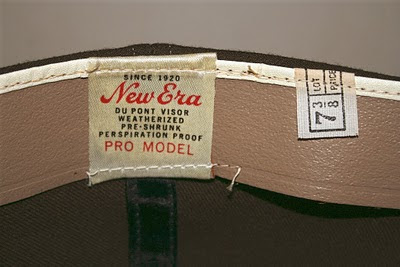 1960 - 1981: There are two variants during this time with the New Era tags; one says “100% WOOL FABRIC" and the other says “PERSPIRATION PROOF.” My first thought was that this had to do with a difference in cap materials or a cloth or leather sweatband. However, this is not the case as I have seen both tags on caps made with the same materials. This set of tags is used the longest out of any in New Era's history. 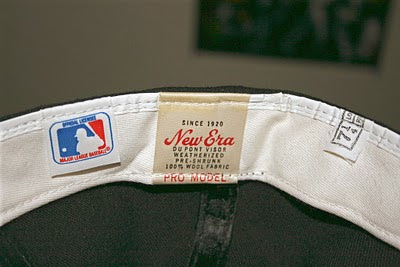 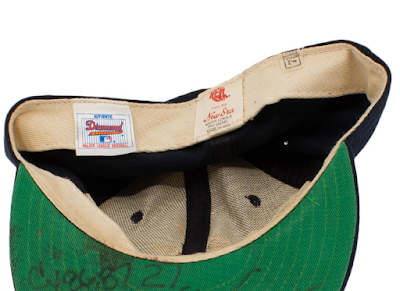 1988 - 1989: New Era and Sports Specialties are granted co-exclusive rights to provide MLB on-field caps. The "Diamond Collection" tag replaces the MLB Licensee tag and the New Era tag is revised showing two logos and less text. The “LOT/PRICE” size tags also begin to disappear, showing up on some caps and not on others. New Era likely introduced the new size tag upon running out of the old one. Other interesting changes happen to the caps. The white "reed" along the sweatband disappears. Leather sweatbands are last offered to MLB players in 1989 (MLB still offers leather for MLB umpires to the present day). Photos are from game used examples as I don't have any good examples in my personal collection. If you can take better example photos please email me. 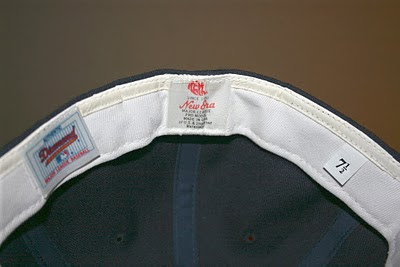 1989 - 1990: This style begins to appear in 1989 with a slightly revised New Era tag. Note that the white "reed" along the sweatband returns. This is the final time that New Era's sweatbands have reeds. During this period, the panel tape is tonal and the caps are made with a different construction pattern that features a larger crown and visor. Source: a game used example can be found HERE. The cap in the link also features an uncommon size tag variation.

1991 – 1992: Note that there are two variants; one with a "Diamond Collection" tag sewn on at the top and a shiny New Era tag, and the other with the Diamond Collection tag sewn on at the top and bottom with a paper New Era tag. The New Era tag is again revised. Caps during this time are made with two different construction patterns; the traditional one and the large crown and visor version. MLB "batterman" logos are added to the back of the cap in 1992. Caps manufactured prior to 1992 have the MLB logo patch glued on, caps made in 1992 have the logo directly embroidered on.

1992: This variant shows up during the 1992 season, featuring a new, larger size tag that is heat-pressed onto the sweatband s opposed to being sewn on. Source: 1992 Boston Red Sox game used cap, 1992 California Angels cap (MLB logo embroidered on, Angels cap logo changed the following season).

1993 - 1994: The tags undergo an upgrade. They are now embroidered instead of printed. The New Era tag in the top photo is short-lived and dropped in favor of the 2nd photo's design, which now features an official logo for the "5950" cap model. 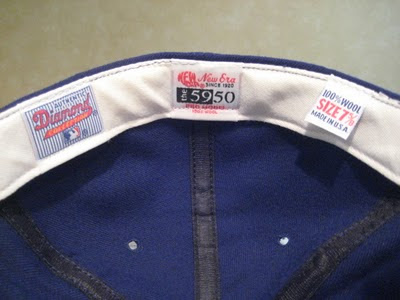 1994 – 1996: Now the exclusive supplier of MLB on-field caps New Era slightly alters the tags, mostly making the designs and text slightly smaller. The size tag is is now sewn on at the top instead of being heat-pressed on. New Era returns to their traditional cap construction pattern and the large crown and visor caps are phased out. 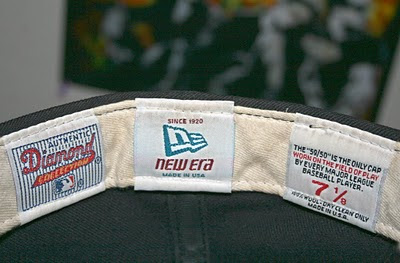 1996 – 1997: The infamous “flag” logo makes its debut. The main tag again undergoes a major overhaul as well as the size tag, which is now bigger than the main tag and features text about being the only cap worn on the field by MLB players. 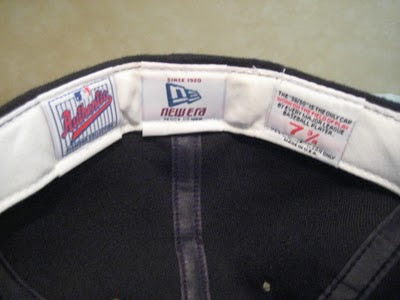 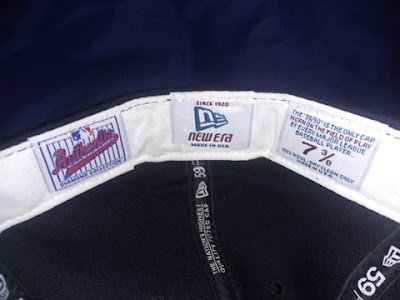 1998 – 2000: The New Era tag and size tag remain largely unchanged, but the "Diamond Collection" tag changes to “Authentic Diamond Collection.” New Era slogans begin to appear on the seam tape. At first they appear on the taping between the front panels, then on all of the taping. The size tags change from red and black to teal and maroon at some point in 1998 (1998 World Series caps have teal and maroon text). 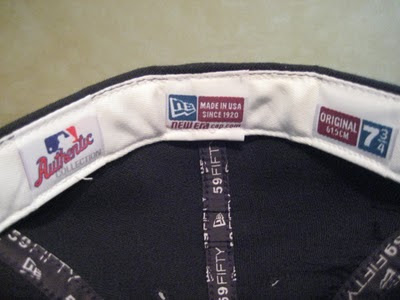 2000 – 2001: All tags again undergo a major overhaul and start showing up during the 2000 season. The word “Diamond” is removed altogether from the “Authentic Diamond Collection” tag and thus becomes the “Authentic Collection.” Source: 2000 World Series New York Yankees cap. 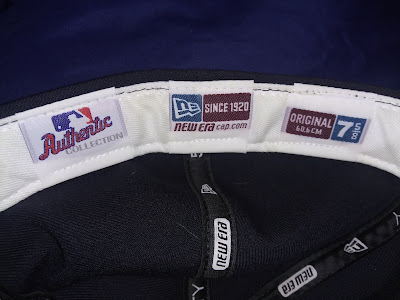 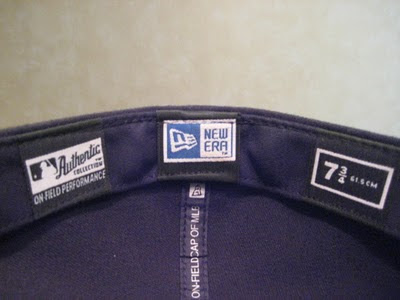 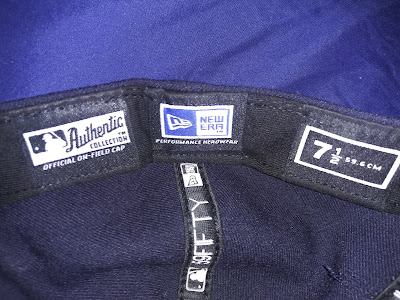 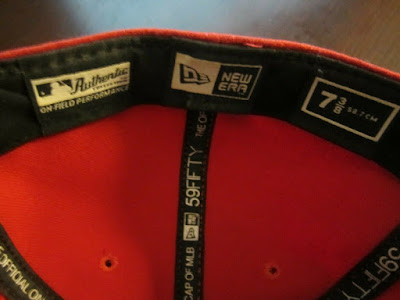 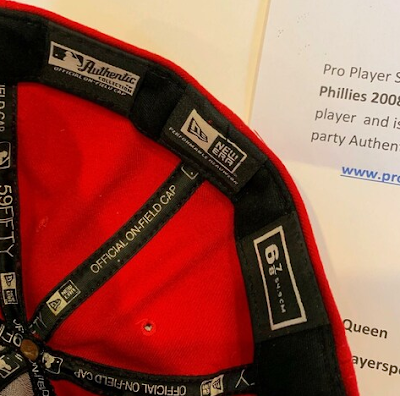 2006-2008: 100% Polyester on-field caps make their debut most likely during the 2006 postseason, as World Series footage from that year shows players wearing a mix of gray and black undersided caps. Now that the sweatband is black, the tags are changed accordingly to match. There are four variants, and unfortunately it's nearly impossible to tell which tags are used each year. The tag with "Performance Headwear" under the blue and white New Era logo appears to be the most common variant. Sources: 2006 World Series caps and footage, 2008 Philadelphia Phillies game used cap, 2008 Phillies World Series game used cap. 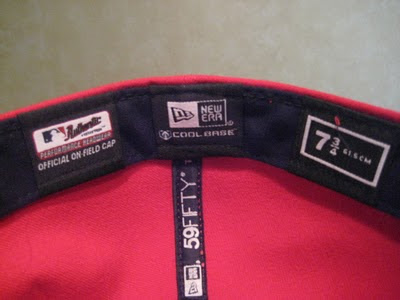 2009 – 2011: After using four styles of tags over the course of two years, the tags finally get back to one standard design. The "Authentic Collection" tag gets upgraded with a new design and some color. The New Era tag gets the "Cool Base" logo added below the New Era logo. 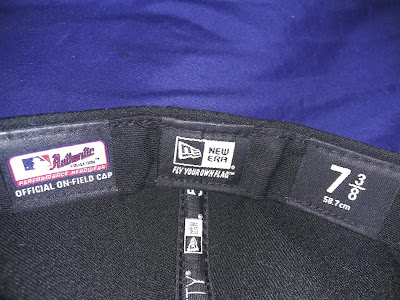 2012 - 2016: The "Cool Base" logo is eliminated from the middle tag and replaced with the "Fly Your Own Flag" slogan. The size tag changes as well, with the removal of the "box" and the size of the text is greatly increased. Source: 2012 team issued caps, 2016 San Francisco Giants game used cap.

2016 - Present: During the 2016 season, the "Fly Your Own Flag" slogan disappears from the middle tag and the country of origin & materials text on the back of the tag changes from bold to normal font. The New Era "flag" logo makes its full-time debut on the side of  the cap during the 2016 World Series. Source: 2016 Chicago Cubs World Series cap.

2019: The tags that first showed up in 2016 remain, but many caps being made by New Era's Derby, NY plant before it closes begin to show up with a very long country of origin/materials tag on the back of the New Era tag. Source: Game used Seattle Mariners "Pilots" TBTC" cap, various others. The Derby plant closes in June and caps made in Hialeah, FL begin to show up. Some lack the "OFFICIAL ON-FIELD CAP" text on the Authentic Collection tag. Source: Arizona Diamondbacks team issued cap, all game used/team issued "Player's Weekend" caps. However, the majority of caps made in Hialeah, FL continue to use the same set of tags used since 2016.

This guide is being provided free of charge. If you found it to be informative or helpful, please consider leaving a tip HERE. A lot of time and money went into the research for this guide!