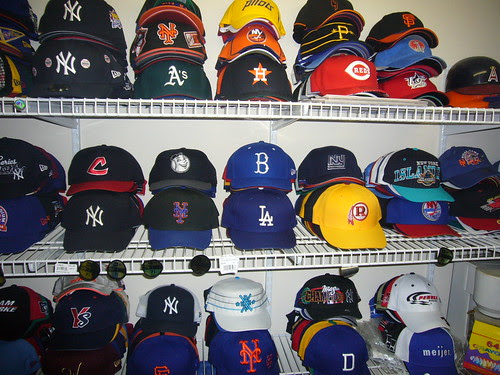 How have you acquired your caps? I have acquired them at Stadiums, in Cooperstown, at Card Shows, Sporting Good Stores, on eBay and other auction sites and from numerous online stores. Prior to the late 90's, whenever I visited a new city I would check the yellow pages for local sporting goods stores and check them out. That is how I originally came upon Mitchell & Ness when I moved to Philadelphia in 1986, which was about a year before they became famous. 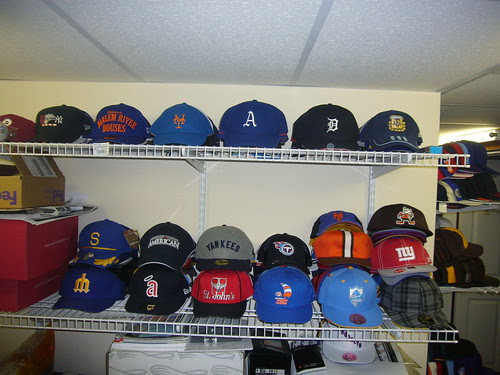 What do you consider to be your “holy grail/grails”? For the longest time a 1974-79 and 1980-84 Padres cap were my grails. Now that I have a leather and cotton sweat band version of each of those, my current grail would be a new Era 1976 Mets bicentennial pillbox cap that fits (Size 7 3/8). I picked one up last year in a 7 5/8 but it is huge on me. I could only wear it on top of another cap! 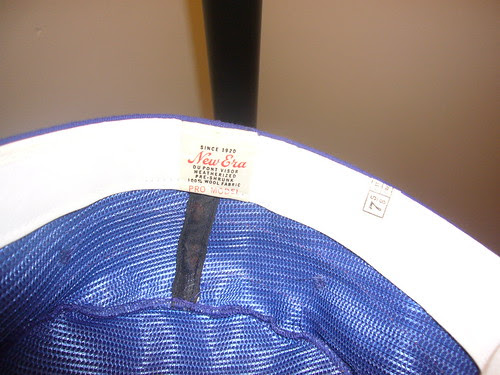 What is your favorite cap manufacturer? No question it is New Era. The overall quality and fit I find significantly superior to any other manufacturer. Before they went out of business, the Cooperstown Ballcap Co was excellent for any cap prior to about 1950. Anything after that just did not look right, but they were great for the true vintage looking caps. 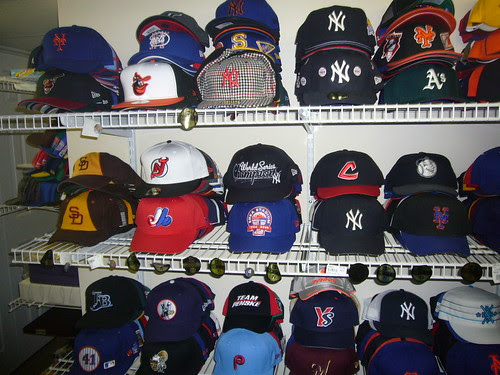 What about baseball caps appeals to you? To be honest, I am not sure. My best guess is that I think it brings me back to my childhood and remembering going to games with my parents and usually getting a new cap. As a kid it was always very exciting to me to get a cap and wear it like the real players. Player model caps were not commonly available back then, and I was young enough that I didn't know the difference. 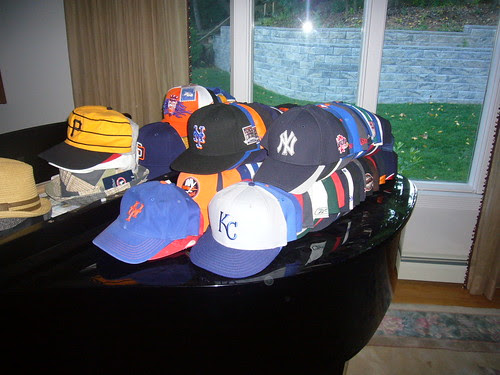 What was your first pro-model baseball cap? My first was New Era Yankees cap that I purchased at Gerry Cosby's in Madison Square Garden in 1983. 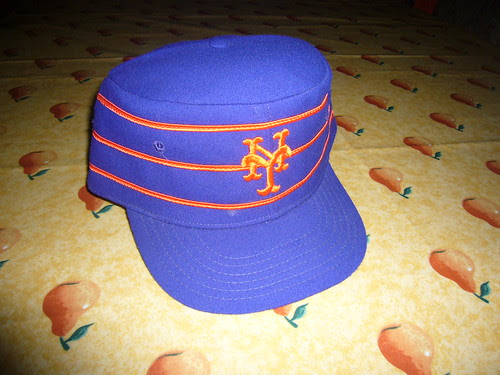 What is your favorite cap of all time? I think I have something in common with you on this one, it would be the 1974-1979 style San Diego Padres cap. In part, I think this is because when we went to games when I was a kid, they inevitably seemed to be against the Expos or the Padres, and I loved the Padres colorful yellow and brown uniforms. Again, I think I like them because they remind me of when I was a kid. 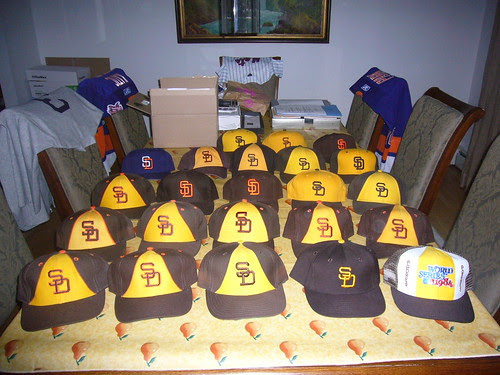 What is your favorite baseball team? As tough as it is to admit the way
they have played and been run lately, it is the Mets. 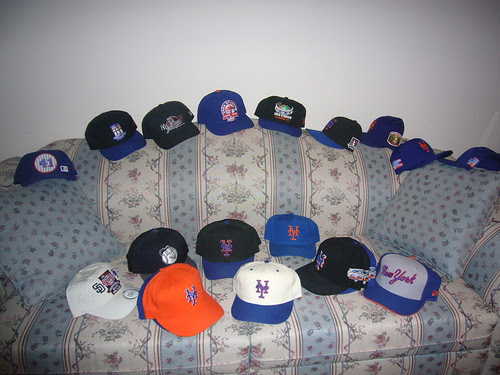 Do you wear any of your vintage caps, or do you keep them on display, on a shelf, or in a box, etc.? I wear them at home, but not out of the house. I only buy caps that fit, so that I could wear them. I own about 500 caps all told, and there are maybe 10-15 that I actually wear outside. Even so, it bothers me to own a cap that doesn't at least somewhat fit me. 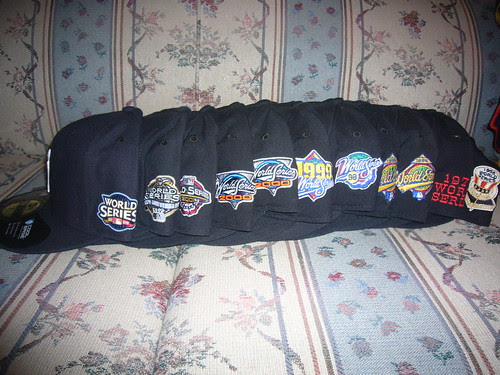 Wool Caps or Polyester Caps? Wool definitely. I purchased a few of the polyester ones when they first came out, but I don't like the feel or the fit. They seem to sit much higher on the head than the wool ones. I have spent my time lately looking for the 2006 and earlier wool caps which are getting quite hard to find. 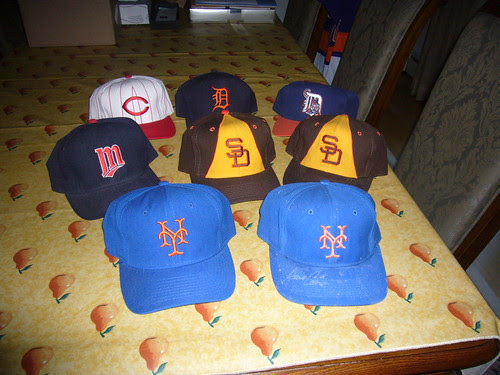 Leather Sweatbands or Cloth Sweatbands? I like the thought of leather, but I hate how it feels on my head, so cloth. 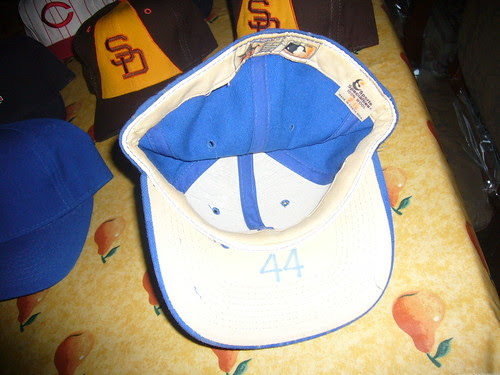 Anything else besides caps that you collect (sports or non-sports related)? I collect jerseys as well; game used, retail authentics and throwbacks. I used to collect baseball cards. From 1975-2003 I have at least one complete set from each season. It got to the point, though, that with so many sets, chase cards, etc... that I lost interest. I liked being able to collect the complete sets. When there got to be 39 different complete sets and it became impossible to ever have a complete anything with all of the chase cards, I just gave up. 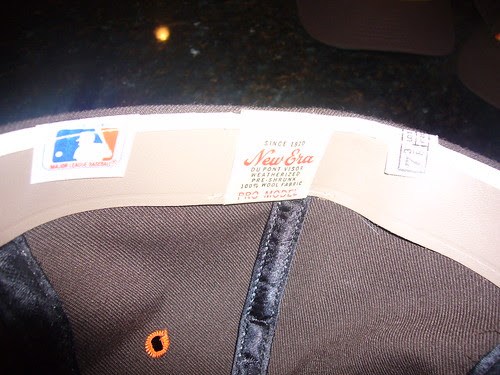 Any hobbies or other interests? I am a huge sports fan and I love going to baseball games. As for hobbies, the sports memorabilia collecting is about it, and it takes up most of my closet space.